He current group now consists of:

As a result of this merger, the total group will now consist of 90 employees. This guarantees that the group will be able to meet the increasing demand for engineering capacity in Europe and South America, despite the tight labor market. 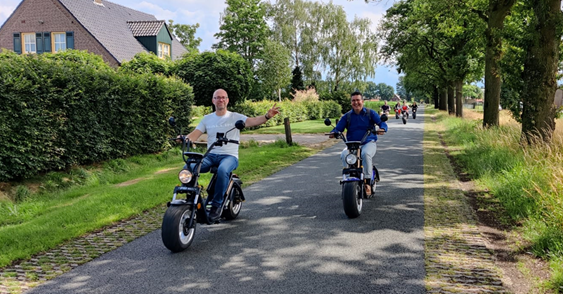 Our day out took place in June. Due to Corona, this event has been delayed for a long time, so everyone was looking forward to it even more! On an E-shopper we toured through the Someren landscape. We made three stops. At the first restaurant, we enjoyed a delicious starter. A second stop, we enjoyed a main course in the middle of nature and ended with a plate of various desserts. We were very lucky with nice weather and drove around in the sunshine. We all enjoyed this day and are looking forward to the next event! 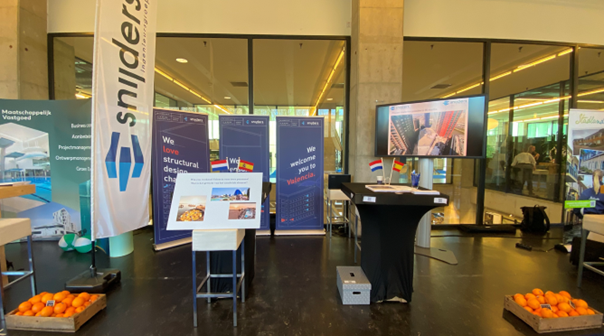 Last March, Snijders Engineering Group participated in the “Bouwkunde Bedrijvendagen” at Eindhoven University of Technology. Sebastiaan and André represented the stand at the fair. The stand showed photos and videos of various projects by Snijders Ingenieursgroep. There was also a  competition; What is the weight of the sandwich. Many students participated. You could win a weekend in Valencia. Who wouldn’t want that? The participation in the fair was very successful and we introduced students to precast concrete structures.
The winner of the competition has also received her prize . She was invited to the offices of Snijders Ingenieursgroep. While enjoying a snack and a drink we handed over the prize. Renske and Thom, we wish you lots of fun in Valencia! 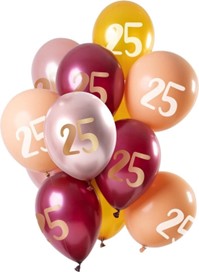 It is already 25 years ago that Karin started working at Snijders Ingenieursgroep. Over the years, she  became an administrative all-rounder. Karin is always there for Snijders Engineering Group and you can contact her for anything. She is an appreciated colleague! Therefore, this special anniversary we cant’t let it pass by unnoticed. As a surprise, we organised a reception. Together with family and colleagues, we made a great evening.
Karin thanks and on to the next anniversary! 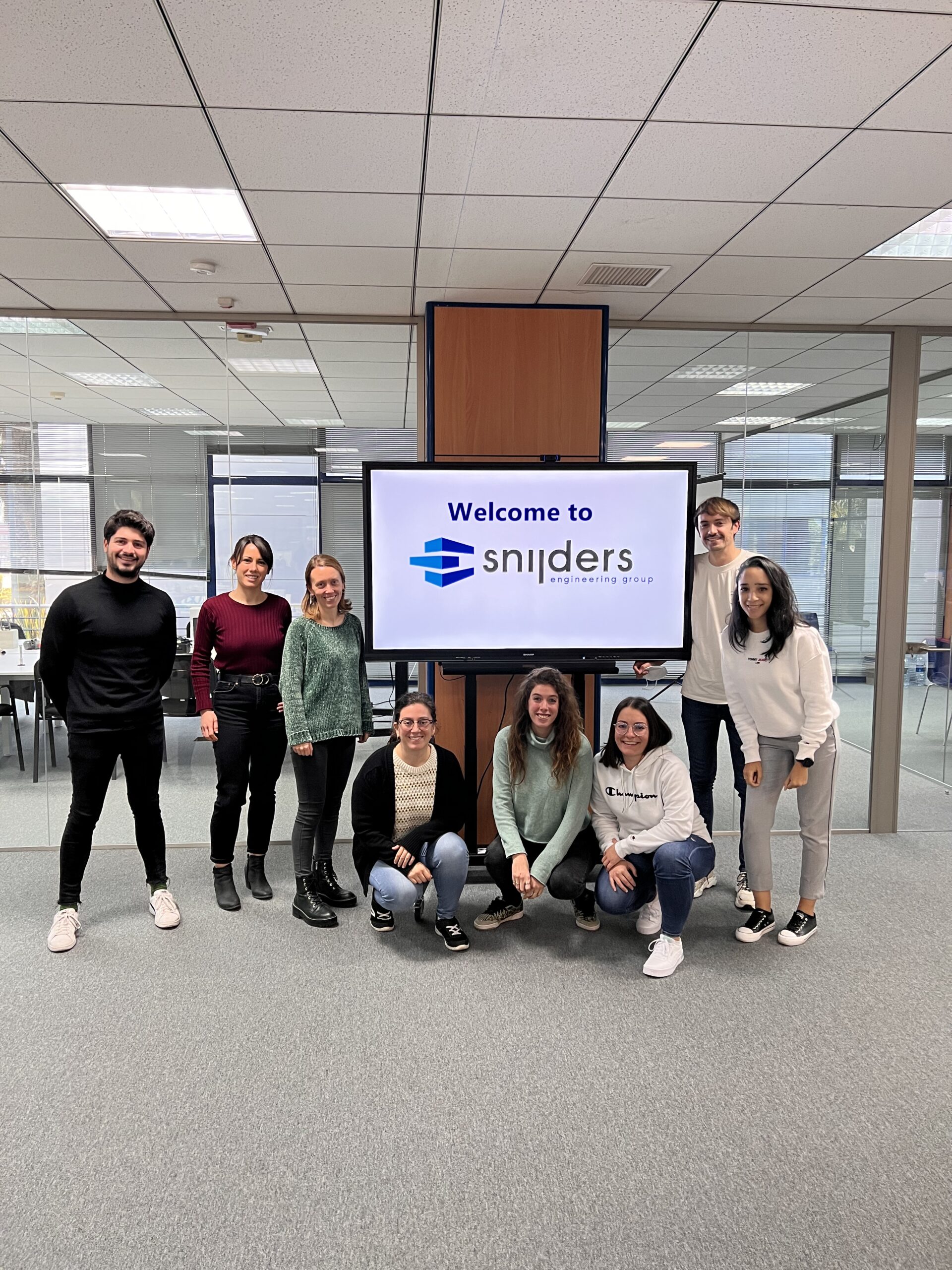 2022, a new year! This is also a new beginning for us. In January, eight new colleagues joined our team in Valencia. It concerns two structural engineers, two Revit modelers and four Tekla modelers. We are pleased with the expansion of our team and look forward to working with them on beautiful projects in the future! To all new colleagues, a warm welcome to Snijders Engineering Group and good luck with this new challenge! 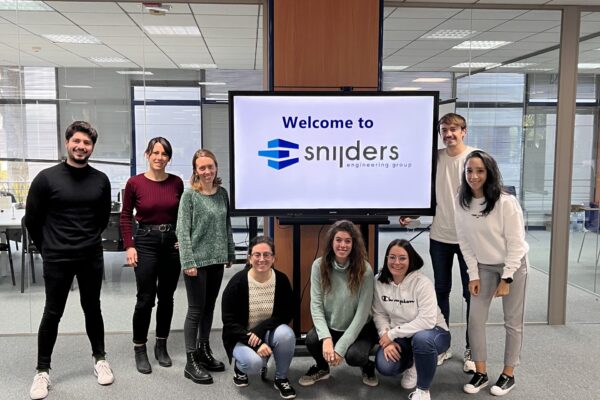 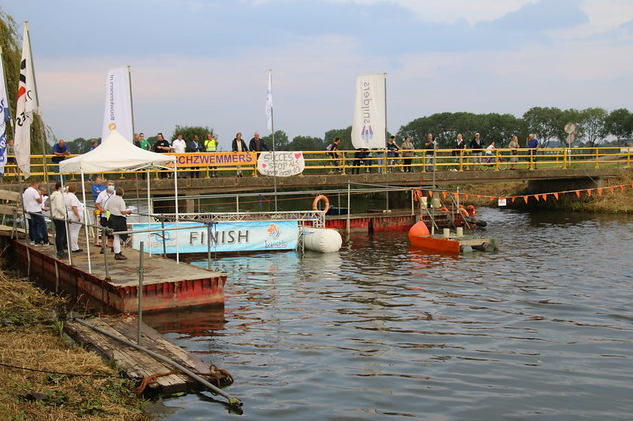 Snijders Ingenieursgroep and Bouwkenners.nl have sponsored the eighth edition of the Biesbosch Open Water Race and the Open Dutch Championship 2021. You could easily recognise our flags at the finish line! More than 80 volunteers, 32 sponsors, 380 race starters, 80 performance swimmers for “ALS het je raakt” made this event possible. The weekend was full of surprises. The championship prizes were handed out by the Federal Coach Open Water Swimming Thijs Hagelstein, the “Brabants Buske” came by to make a live report on Omroep Brabant and with the achievement tour they managed to raise 2000 euros for ALS het je raakt! It was a pleasure for us to contribute to this event, which also supports the ALS charity. 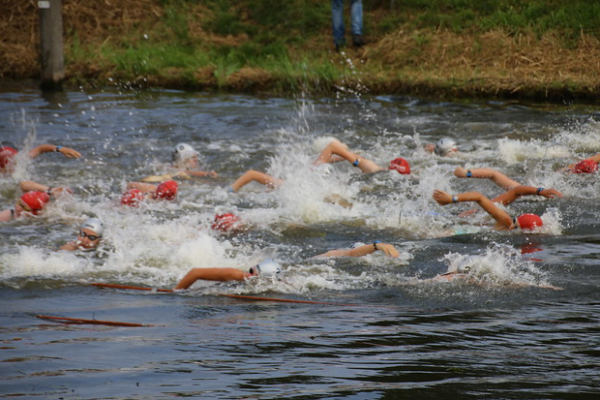 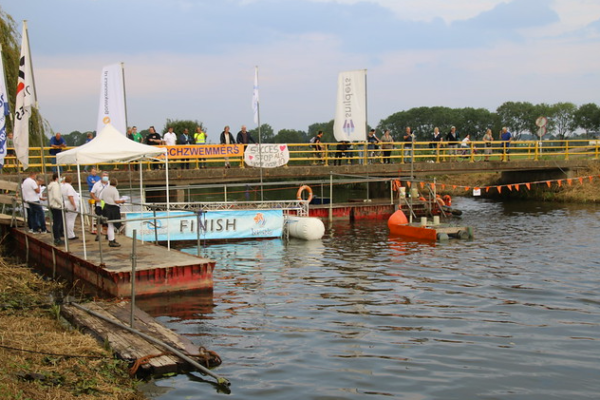 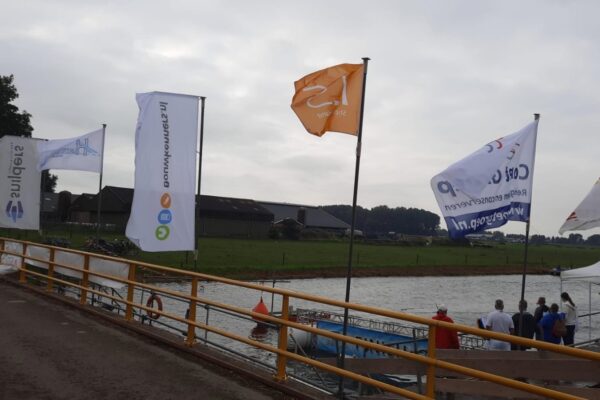 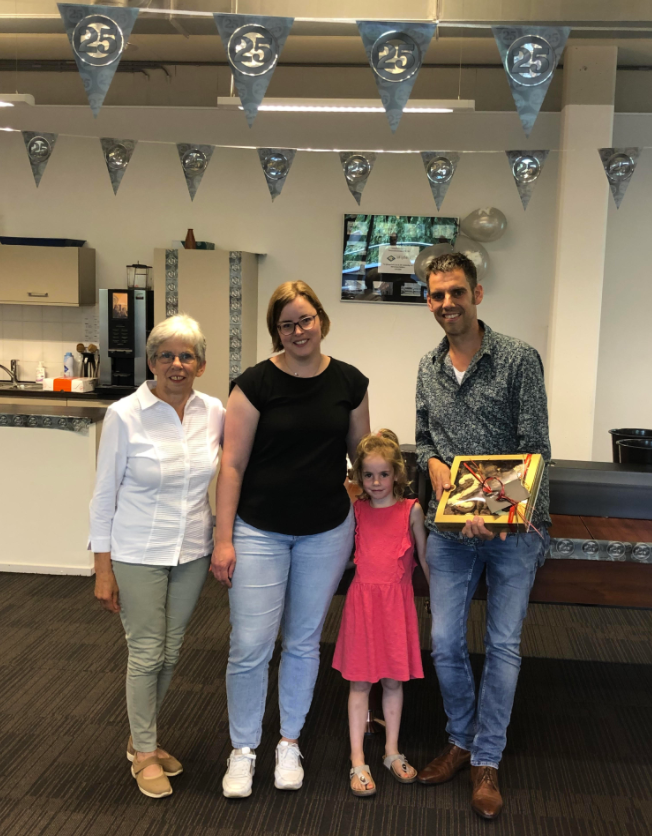 It is already 25 years ago that Michel started working at Snijders Ingenieursgroep as a modeller. Over the years, he has developed into a project manager. In good and bad times, Michel is always there for Snijders Engineering Group and is a appreciated colleague!

We celebrated this unique anniversary in a small group because of the current Corona measures. Together with his wife, daughter, mother and all his colleagues from Snijders Ingenieursgroep, we had a nice and pleasant party.
Michel congratulations and on to the next anniversary! 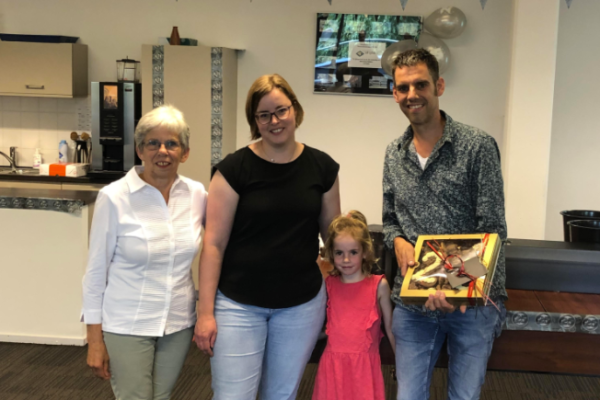 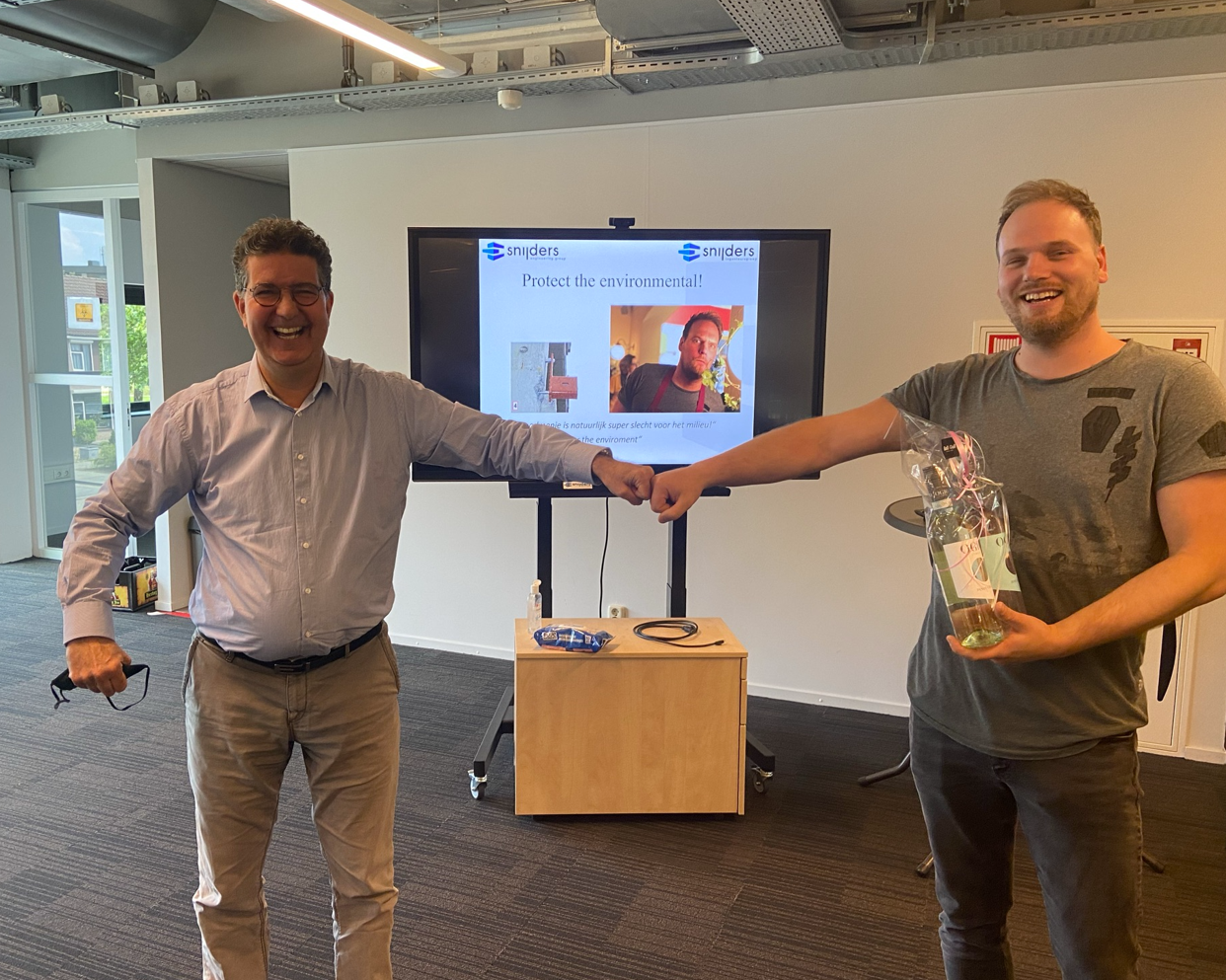 Snijders Ingenieursgroep organized a quiz for all its engineers.
The construction faults had to be discovered with the help of various photos.
A very educational exercise that tested the knowledge, experience and creativity of the engineers. After an intense “quiz battle”, an expert jury, chaired by Sebastiaan, selected the winners in the various categories.
Both colleagues from Valencia and Veldhoven have won prizes. Congratulations gentlemen and have fun with your prizes!

Below on the photo Thijs. The winner in the “sustainability” category.

Mexican lunch for all Snijders colleagues! 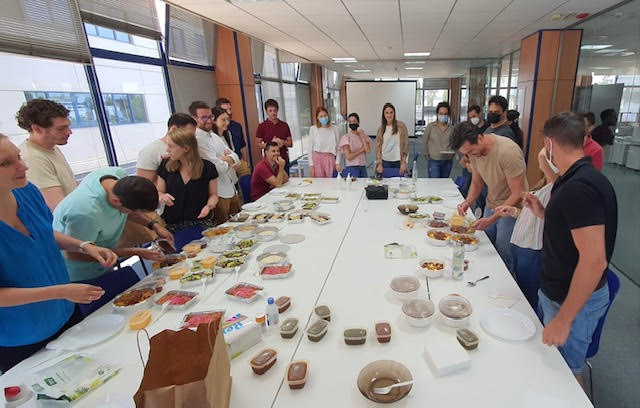 To keep up the spirits and reward everyone’s hard work, we had a delicious Mexican lunch with Mariachi music prepared in Valencia and in Veldhoven.

Our office in Valencia enjoyed several individual dishes and in Veldhoven there was a food truck with delicious different types of tacos.

Fortunately, we now see that the number of coronas infected is going in the right direction. The government has started to ‘relax’ the measures. We will have to hold on together, but the end is in sight.

The lunch ensured that we were able to relax and eat with our colleagues in a responsible manner. 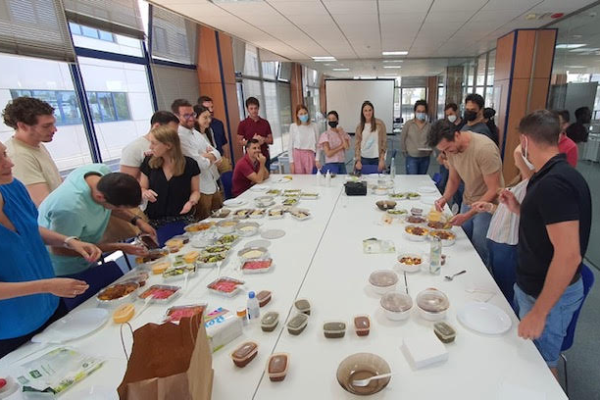 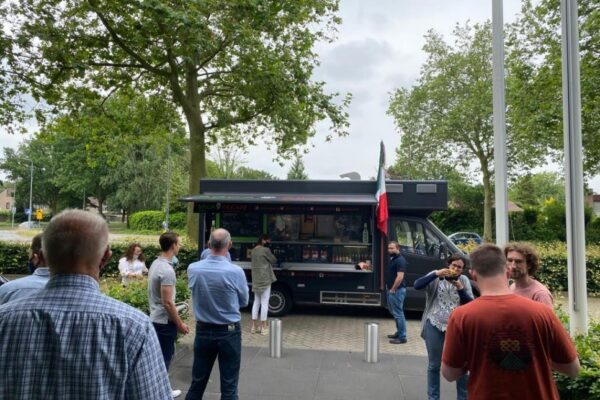 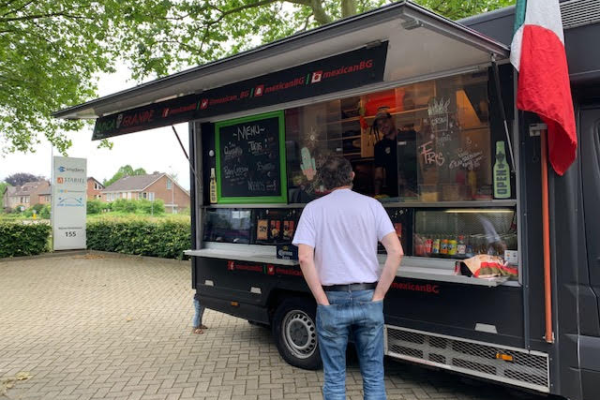 Bouwkenners.nl is a sister company of Snijders Ingenieursgroep. Individuals, architects and contractors can contact Bouwkenners.nl for the preparation of construction drawings and calculations or assistance with the application for an environmental permit. Online! With a team of experienced and motivated structural engineers and architectural draftsman, Bouwkenners.nl is ready to supervise the project. Bouwkenners.nl wants to make building and renovation easier and more economical. With success, because Bouwkenners.nl has won its 1000th order since it was founded in May 2018!
Due to the continuing growth of requests and orders, Bouwkenners.nl is looking for an architectural draftsman and structural engineer. Are you or do you know someone who enjoys working in an enthusiastic team of construction experts? Do you have an affinity with construction? And enjoys helping our clients on a daily basis? Then take a look at the Bouwkenners.nl website for the complete job vacancy and apply! https://bouwkenners.nl/vacatures/
If you are our new colleague or if we find a suitable candidate with your help, we will reward you with a delicious dinner! 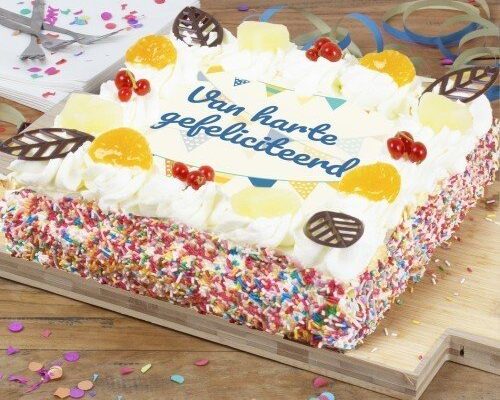 Snijders Ingenieursgroep is an independent engineering office located in Veldhoven (near Eindhoven) and Valencia (Spain). We are concerned with giving advice in the field of building constructions.